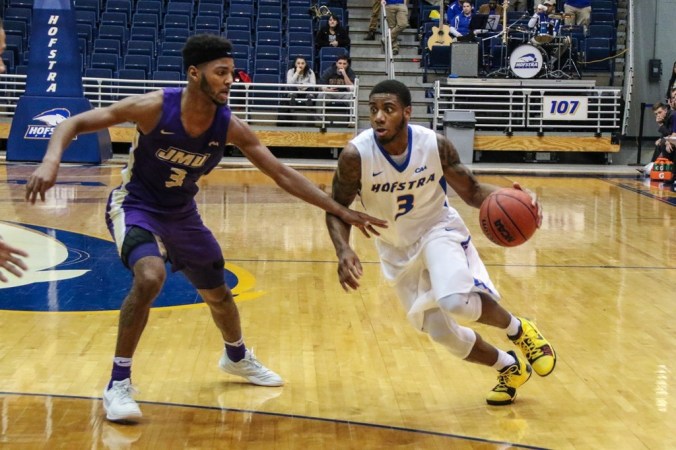 Hofstra guard Justin Wright-Foreman is the first CAA hoops player to have three 35-point games against conference opponents since Towson’s Gary Neal in 2006-07.

Got all them buckets comin’ out of my ears – Bob Dylan

We awoke from the slumber and the landscape did not look the same. Sure, there were basketballs, rims and nets. Cheerleaders stood on the baseline and big cats sat on the sideline. The courts still measured 94 feet. People stood and cheered when they weren’t staring down at their phones. Coaches paced and shouted, officials whistled and pointed. Bands played and babies cried.

And the players passed and dribbled as we remembered, looking to the sidelines for instruction, making crisp cuts and leaping high in the lane.

But the ball, it went into the basket from everywhere, and often, rippling the net and sending the 10 men quickly in the other direction. They made dunks and layups, 3-pointers and bank shots, tip-ins and pull-ups, flew above-the-rim after making steals and tossed in prayers as they fell out of bounds. Buckets, buckets, buckets, I tell you there were buckets everywhere.

As always, we’re looking for efficient, consistent production and winning is important. Offensive Rating + Usage is a neat way of measuring a player’s impact on the game, per possession.

JWF is third in the nation in scoring (25.6 ppg), which is the highest CAA scoring average since future NBA pro Blue Edwards of East Carolina averaged 26.7 ppg in 1988-89. His stats in the six conference games are ridiculous. Wright-Foreman has created an eight-point-per-game lead with 30.5 ppg and also dished 4.5 assists per game.

A polished, diversified offensive skill set makes him such a tough cover. Wright-Foreman scores effectively at all three levels and spreads around the shots. He’s attempted 356 field goals – 46 percent were launched beyond-the-arc, 30 percent in the mid-range and 24 percent at the rim. Coaches typically love to see an opposing player jack a 2-point jumper. Not true in this case. Wright-Foreman has connected on 47 percent. Guards claimed the last three CAA Player of the Year honors. Here’s how JWF stacks up.

The sophomore forward is averaging 20 ppg, eight rpg, shooting better than 50 percent from the field and 75 percent from the free throw line. No CAA player has produced similar numbers since 1992-93 (sports-reference.com). His numbers are even better in conference play, and he’s also handing out two assists per game as coach Tony Shaver moves him around the floor and enables him to become a playmaker.

Heretofore known as The Commodore, here are the closest comparisons to Knight’s combination of scoring, rebounding, shot blocking and field goal accuracy.

For a coach, the only thing better than watching a talented fifth-year senior point guard run your team is watching him clip the nets after leading your team to a championship. Rest assured, that’s the primary priority for Chealey and his teammates, who are 3-3 but also have difficult road trips to Towson and Elon behind them. Chealey has been terrific all season, putting up 19 points per game in CAA action and handing out 16 assists while committing only eight turnovers in 227 minutes.. He’s second in the CAA with 37.8 minutes per game. I wouldn’t take him off the court, either.

Joe Chealey has made 101 free throws against Division I opponents this season and is 46 of 51 vs. CAA squads.

The 6-7 forward is still only a junior. When he plays his best Charleston wins. Check out his splits in the Cougars’ three conference victories and three defeats. He and his senior point guard teammate  combine to form the best 1-2 inside-outside punch in the league. Now, if the Cougars can just resume defending like its 2015-16, they’ll be happy with how this season turns out.

The sophomore guard is atop the conversation for most improved player in the league. He began to flash his potential late last season, erupting for 17 points in the CAA tournament victory over Northeastern, but was inconsistent. This season he’s been as reliable as a traffic jam on the Beltway. Martin has eight 20-point efforts in the Tigers’ last 13 games. He’s failed to score in double figures only once in 17 games and his strong body and aggressive, driving style fit perfectly in coach Pat Skerry’s no-nonsense program. The Tigers are another 3-3 team liable to emerge from the pack soon, with three of their next four games at home.

Last season, Cacok was surrounded by four excellent 3-point shooters and playmakers, could count on 1-on-1 coverage in the paint and, as a complementary piece in a top 20 offense scored all his points on lob dunks, putbacks and by outrunning his man in transition for more dunks. He shot 80 percent to set a national record that’s safer than Dimaggio’s hitting streak, Nicklaus’ major championship count, Wilt’s 100-point game, or hearing someone screaming about ‘Fake News.’ This season, the athletic muscular forward can count on two or three defenders surrounding him at all times. I’ve owned sport coats that were less snug. He’s the center of attention on every opposing scouting report and has been asked to expand his range. And he’s still leading the nation with 12.9 rebounds per game.

The 6-8 forward picks his spots and makes his shots. He’s taking them more frequently during conference play – 26 percent of Elon’s shots when on the floor compared to 22 percent for the season – and is accurate from everywhere, hitting 62 percent of 2-pointers, 48 percent of 3-pointers and 86 percent of free throws. He reminds me of former ODU star and 04-05 CAA POY Alex Loughton (GOOGLE IT, KIDS), except he’s a better long range shooter. All but one of his 47 3-pointers this season came in catch-and-shoot situations.

The Tribe’s captain is a gutsy leader who directs the conference’s best offense (117.5 points per 100 possessions) with aplomb. Vocal and energetic, he’s fast in the open floor and keeps the ball and teammates moving in the halfcourt. Cohn has scored 67 points in the last three games and his shooting percentages are just plain silly in conference play – 65 percent on 2-pointers, 50 percent on 3-pointers and 96 percent at the line. He’s also second in the CAA with a 2.6 assist-turnover ratio in conference games.

From simply a numbers perspective, Daly doesn’t belong in such elite company. But he’s the most valuable player in the conference. He’s an essential component of any Blue Hens’ success. With seven scholarship players, coach Martin Ingelsby has led UD to a 4-2 CAA record. Take Daly off the roster and the Blue Hens would have zero conference victories and not many overall. Whether it’s snagging a late offensive rebound to preserve a road win at UNCW or rarely committing a turnover (8 in 237 CAA minutes) or playing a league-high 93.5 percent of minutes in conference games, Daly has done whatever’s needed to give his squad the best chance to win the game.

I expected Pusica to be a game manager, floor leader type in his first season with the Huskies after transferring from San Diego. But he’s also given coach Bill Coen another dependable 3-point shooter (16 of 44 in conference) and more importantly, late shot-clock playmaker. The Huskies’ average offensive possession in CAA games lasts 16.9 seconds – 9th in the conference – and Pusica has proven to be comfortable when time is dwindling. Other than the winter weather, switching coasts has turned out to be an astute move for Pusica and the Huskies.